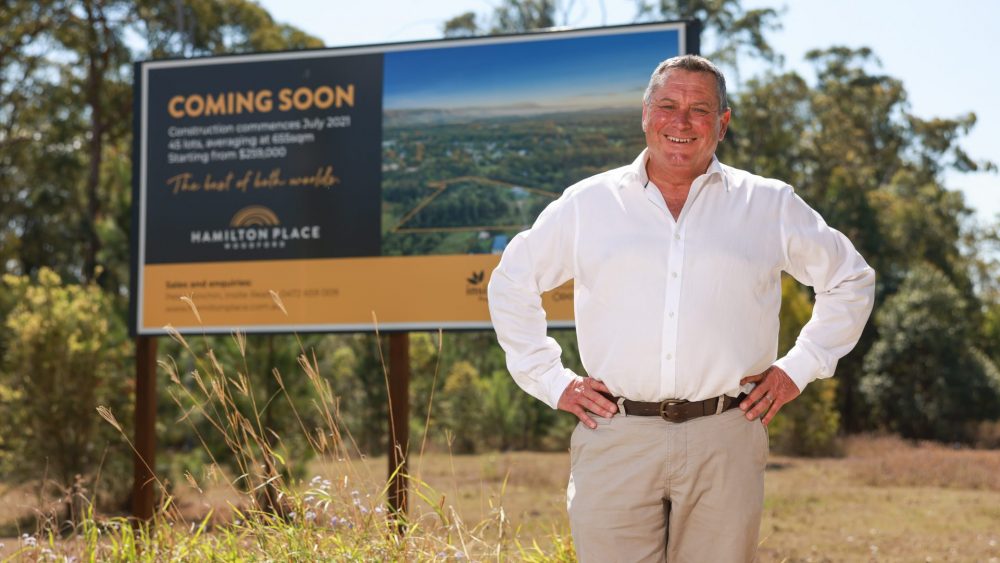 Migration from the cities to the regions continues…

Moreton Bay was recently identified as one of the top-ten buy regions in Australia and the latest sales figures from Woodford’s Hamilton Place estate show the market is responding accordingly, with all lots in Stage 1 committed within eight weeks of launch and Stage 2 now selling.

Hamilton Place developer and Double R Group Director, Ken Reed said interest from the market had exceeded all expectations when the two-stage, 45-lot residential development was launched in July.

“We knew that demand for residential land was high, particularly for lots that offer the benefit of life in a small country town while still enjoying an easy commute to major centres like Brisbane and Caboolture, however the number of enquiries have been much higher than anticipated,” Mr Reed said.

“We currently have all lots in Stage 1 committed, with construction to commence onsite on 11th October, which is very encouraging. We have had a high level of enquiry from Brisbane and surrounds with people looking to move out of the metropolitan area to take advantage of a more relaxed lifestyle, such as walking to school and into the picturesque Woodford township.

“This is in line with recent research that shows the migration from the capital cities to regional Australia was the highest it’s been in 2020 and given the ongoing impacts of COVID-19, we don’t see that abating in 2021. This is certainly reflected in where our enquiries are coming from.”

According to the Australian Bureau of Statistics a net 43,000 Australians moved to regional areas from capital cities in 2020, which was the largest net inflow to the regions on record and up 127 per cent from 2019 when the net gain was only 18,900.

“This migration is expected to drive prices up further in the coming months and years, which has also created a sense of urgency for locals to make their move before they are priced out of the market.

“To this end, we have seen a high level of interest from buyers in the immediate surrounding area of Woodford who have long been waiting for the opportunity to secure land and build their dream home in town.  It’s been at least a decade since there has been a land release in Woodford, so Hamilton Place has generated much interest from local buyers looking to upgrade to a new home or downsize from a rural property.”

Peter and Iris Brooks have bought Lot 1 at Hamilton Place and said they were originally looking at properties on the Sunshine Coast when they came across the development.

“It was an easy choice for us, Hamilton Place, we wanted to downsize and create a more laid-back lifestyle, but not be too far from our children and grandchildren who all live north of Brisbane,” Ms Brooks said.

“We’re quite excited to build a new home and become a part of the Woodford community.”

Insite Realty Sales Consultant Peter Kinchin said the majority of Hamilton Place buyers were owner-occupier rather than investors, and were motivated by lifestyle and in some cases, a change in pace from city life.

“Affordability has also been an important factor in the buyer’s decision-making process with traditional-size allotments in Woodford being very attractive when compared to smaller, more expensive alternatives in the Caboolture, West Caboolture and North Lakes areas,” Mr Kinchin said.

“Those looking to buy in the current market are facing limited availability of land which automatically puts pressure on the price point, so 600sqm lots starting from around $259,000 just a short stroll from a historic country town and backing onto a P-10 school tick a lot of boxes for buyers.”